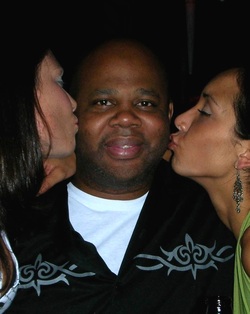 For many of us, Vince was a true friend. It was important that for the First Annual event, that he was represented in the best light remembering the good things he did for the GLBT community. His closest friend, Tya Schoppe, was kind enough to let those who attended this year and future years know who the real Vincent R. Johnson was:

Good evening. I’m so glad to be here tonight, and I feel so honored to have been given this opportunity to share a little bit about Vince Johnson with you. But first, I just want to thank Teresa Ewers and Pride and Equality magazine for creating the Models of Hope award and for their continued commitment to the GLBT community as a whole. I knew Vince for over ten years and considered him to be one of my closest friends, and it was through our friendship and the years that I worked for him that I saw first-hand his genuine love for people and his tireless efforts to improve the lives of those around him, so I can’t even express how much being associated with this extraordinary award would have meant to him. I only wish he could be here with us tonight.

So who was Vincent Reid Johnson? For those of you who had the pleasure of getting to know him, the following details should come as no surprise. For those of you who never had the chance to meet him, I hope I can provide you with some insight into what a remarkable human being Vince was. But we’ll start at the beginning. He was born on September 28th, 1963 in Little Rock, Arkansas. The exact details of his early years are sketchy, but he was living in a children’s home when a social worker there named Jordan Harris first met him. Jordan quickly fell in love with what was sure to have been a pretty amazing little kid and adopted him. Vince thrived as a child, growing up in Tulsa, Oklahoma with Jordan and his adoptive mother and sister. A quick glance through his 1982 Will Rogers High School senior yearbook gives you a good idea of the type of person he was. Needless to say, his picture is everywhere, and here are just a few of the highlights from his senior year: Voted “Most Friendly”. Number 66 on the varsity football team. Chosen for November’s “Boy and Girl of the Month”. Honored with the “Tower Award” for distinguished service to his school. Senior class treasurer. President of DECA. And in the back of the yearbook, he mentioned hot tub parties, cruising with friends, and school activities as being some of his favorite pastimes. He listed Grease II and E.T. as two of his favorite movies, and, of course, “Ebony and Ivory” was one of his top songs.

After high school, he enrolled in Oklahoma State University. Naturally, he was just as active in college as he had been in high school, as president of Phi Kappa Phi fraternity and an officer candidate in the Army’s ROTC program. His passion for business and marketing eventually led him to Phoenix where he partnered himself with several individuals in the service industry and helped to open a variety of night clubs in the area. These clubs were so successful, his partners sent him to Albuquerque in 1994 to open the Zone, which eventually became the Sunshine Theater and attracted some of the biggest names in the hip-hop, reggae and pop music industries. Over the years he opened and managed many other clubs and restaurants here in Albuquerque, including Martini Grille, Park Place, Baja Cantina, and, of course, the Pulse.

Of all the places Vince opened and managed, he was most proud of the Pulse. The Pulse, as many of you may know, was an extremely popular dance club and a second home to many people in the GLBT community. It was the type of place that was open to everyone, and people loved it because the minute they walked in, they felt welcomed. It was a fun, happy place to be, where judgment and drama (not always the drama!) were checked at the door. Vince can take all the credit for that. He was entirely responsible for creating the atmosphere there. It was also the place where numerous special events where held, such as Gay Pride, where Vince served as the Master of Ceremonies.

Vince Johnson did indeed have a real talent for business and marketing, but his true love was charitable work and being active in the community. For seven years, he hosted a huge annual Christmas party at the Sunshine Theater to benefit Youth Development, Inc. or YDI Head Start, which is an Albuquerque-based nonprofit program, providing educational, developmental, and humanitarian assistance to children and families in central and northern New Mexico. Not only did he host the party, he also conducted a massive toy drive in support of it. Vince’s enthusiasm for the event was contagious, and he always got all his friends involved. Everyone who knew him during that time inevitably found themselves making a trip or two to the toy store to pick up gifts for the kids. But Vince simply saw this Christmas party, where thousands of presents were handed out every year to children in need, as a way for him to give something back to the community.

Vince was also the founder and president of Crème De La Do International, a company created to organize hair and fashion shows with the sole purpose of raising money to benefit various non-profit HIV/AIDS organizations, including New Mexico AIDS Services, a non-profit community-based organization whose mission is to enhance the quality of life for people and communities affected by the disease through innovative and comprehensive services, support and prevention education. After finding such success in Albuquerque, he took his Crème De La Do benefit show to Phoenix and donated profits to AIDS Project Arizona, an organization that provides services to individuals who are infected or affected by HIV/AIDS. After that, he expanded the show to El Paso, where Crème De La Do’s profits went to support International AIDS Empowerment, a peer-staffed treatment education program for HIV-positive individuals and their families.

Clearly, Vince had unsurpassed vision and drive and an unrivaled commitment to the community, but please don’t forget that, first and foremost, Vince Johnson was just a regular guy. He was a good person, and he was a good friend, in addition to being a successful businessman and a proud, gay community leader. We lost Vince on August 25th, 2006, but his memory lives on, and I hope the winners of this year’s award will find inspiration in his story and continue to serve as models of hope for the community. Thank you.
GET YOUR TICKETS NOW!
MOH Awards
Who is Vincent R. Johnson
MOH Past Winners
MOH Nominations
MOH Sponsorship
MOH Raffle Donations
Powered by